A Year of Trying to be a Better Mom 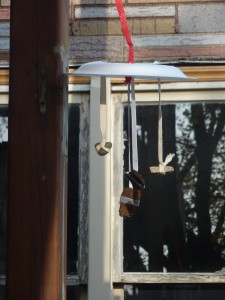 Our project of the day

And that’s mobile as in “baby” and not “Bat”. Just for clarification. Or, perhaps they are more like wind chimes. Whatever. We attached some wood chips and gravel rocks to strings, hung them on a paper plate decorated like the Earth. All in honor of Earth Day. I bet Earth feels super humbled by our actions.

For the most part this was just some outdoor playtime, but I did manage to squeeze a project in.

To show just how Earth Friendly we are, Zach decided to cruise around in his low emissions, fuel-efficient vehicle. This one is a hybrid, powered by feet and rocks. You can see him fueling up with gravel in this one. It’s a bonus in the winter time, he doesn’t even have to get out of the car to fuel up! 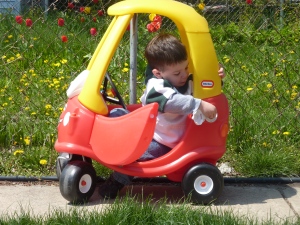 Cruising the neighborhood in an Earth friendly car

Emily and Isaac enjoyed some solar-powered tummy time (or perhaps the opposite, since they were in the make shift shade).

Tummy Time. As is typical, Isaac is working at it, Emily decides to sleep.

Now down to the nitty-gritty. I made up this specific design on my own, but was inspired by THIS. But we live in the city, so large, sturdy sticks are hard to come by. I decided to tweak it for our purposes.  For this project I used the following supplies: 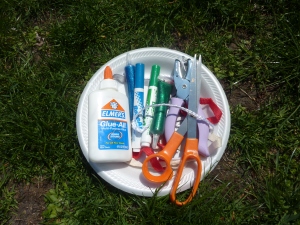 A disposable plate (I say it like that b/c I am embarrassed to admit it’s styrofoam on Earth Day), scissors, glue, markers, glitter pens, and remnants of strings and things that can be used to hang items. I actually never used the hole punch, but thought I might.

First Zach and I went around the house to look for sting type items we could use to hang the rocks and wood. I didn’t have any actual string, and in honor of the occasion, thought we could reuse stuff we already had. We used some ribbon from a package (my friend Erin at ECC might recognize that ribbon!) and some shoe lace-y type stuff from another. We also had a red nylon strap that goes to something we can’t find anymore.

Then I had Zach go to the side of our house where there is some gravel. I told him to help me find some rocks. A task he once again enlisted the help of his dump truck and shovel. I tried encouraging some counting skills by saying I needed 2 big pieces, but I was pretty much given one HUGE chunk and a whole dump truck of little pieces. I suppose that works. 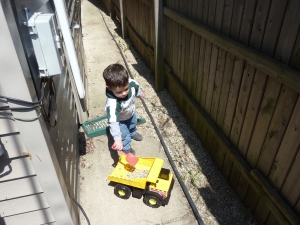 I asked him to help me pick out some pieces of wood from the wood chips. But he decided to pick me a flower instead. And the sweet talk worked because I picked out the two pieces. Then I tied the 2 rocks and the 2 piece of wood to our ribbon and lace. You could put a dot of glue onto each knot, to help secure them further, if you want too.

Wood chips and gravel all tied up with strings, these are a few of my favorite things! Julie Andrews eat your heart out!

Then between bites of Oyster Crackers and apples, Zach helped me color the plate we’d hang the strings from. I wanted the plate to kind of resemble planet Earth. I also thought I’d do a lesson in shapes. So I drew some shapes on the plate in green. I arranged them in a “sort of like the continents” fashion–the rectangle for North America. The triangle for South America. Europe and Africa represented by the circle and oval (respectively). Like I said, a loose interpretation, but you get the idea. I thought I’d encourage him to color the shapes green and the stuff around it (the water, I told him, water from the ocean) blue. But pretty much he grabbed every marker in the pack, used every color BUT blue and green and colored his world (so to speak). So, I colored in the shapes. Things got a bit exciting when I busted out the glitter pens. THOSE he was interested in. I traced the continents and helped him make squiggles in the water. It gave it some pizzazz, don’t you think?

Things got interesting when we busted out the glitter glue 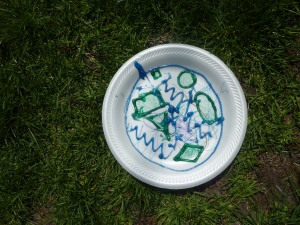 Now we had to wait for the glitter glue to dry. That’s why this is posted so late today, had to wait for a finished product to show. Other things we did outside today–chase the neighbor’s cat and try to get it to play catch, sidewalk chalk and riding on our turtle toy. Pretty good stuff all around. 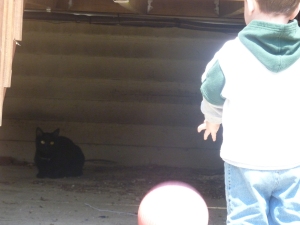 Sidewalk chalk: fun to draw with, fun to roll down the stairs

Riding the turtle. No "actual" turtles were harmed during the filming of this play time. 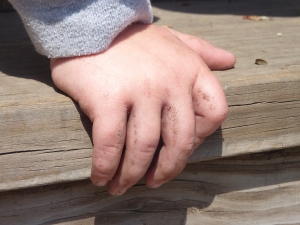 Sign of a good day: some seriously dirty hands.

Finally, after nap, the glue was dry enough to poke some holes in the plate, hang the strings and tie onto the deck.

Looking up at our finished product

Hanging up on our deck

What did Zach learn today? Honestly. I’m not sure. I was hoping for some color and shape lessons. He was not too interested in paying attention today. Though later on he did point out the circle and triangle, so again…perhaps he learned more than I give him credit for.

What did Mommy learn today? That this is not always going to be easy. I wondered if I should give up on the project when he would not help out too much. Though, like I said, once the glitter came out, it did get more fun. And also that doing a project outside that doesn’t involve too many outside things might not be a good idea. Too many other distractions. But, we tried! And that’s what counts!!