A Year of Trying to be a Better Mom

It’s that time of year. The time where flower boxes are being planted in a frenzy to complete some NEED within us to beautify our spaces. This is more challenging for me than others. I have what is not the opposite of a green thumb, but close to it. This will be the 3rd summer of flower box planting for me. The first summer was pretty near disastrous. It got so bad that I pretty much gave up on my flowers and then  my father in law came over for a week and replanted for me! I was equal parts embarrassed and grateful (thanks Wally!).

Last summer, it went better. Not awesome. But better. I planted a few varieties of flowers in each box and they were colorful and lovely. But in the end the ONLY flowers that survived were the Geraniums. I think those things could survive nuclear war. So this year, I just went with what works. ALL Geraniums. Pink and Red.

Given how much Zach likes to play with dirt, and that I still can’t share our super secret craft projects yet this week, we have another planting/playing in the dirt activity today.

To begin, Zach was helpful. He was there with shovel (and dump truck, of course) to help me take the dirt out of the bag and get it into the flower boxes. These pics will probably look a lot like when we planted the marigold seeds!

Getting the dirt (he looks a lot like Pete in this pic, I think)

After a little while though, this was a “been there, done that” situation for Zach and I still had 2 more boxes to plant. So, I set him up with his next favorite thing: bowls of water. I thought this was a good idea because it was kind of hot sitting on the deck in the direct sunlight and the water would be nice. Well, I should have SEEN where that would get me. Dirt. Water. 2-year-old. There is only ONE place it COULD go…MUD! But mud is fun, right? 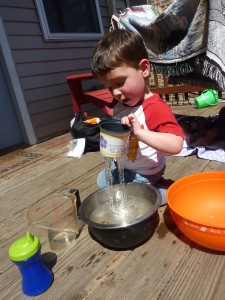 In this one I showed him what happens when he uses the old flower pots w/ the holes as a "scoop", all the water runs out like a shower. He was AMAZED and delighted by this.

And then the good, "clean" fun turned into MUD

He is completely covered.

As dirty (and possibly scary looking) as that was, I’m glad I let him do it! One, he loved it, obviously. But two, it was kind of a science experiment for him. I talked with him about what was happening to the water when the dirt went in. About what happened to the dirt when it got wet. We talked about how different the mud felt from the water and the dirt. Luckily he kept it pretty much contained and didn’t fling it! Now that I think of it, his brother and sister were sleeping dangerously close by this little experiment!

While he played away, I continued on with the other 2 flower boxes. And well, they honestly got done much quicker without his assistance. I also tried to point out to him the colors of the flowers and their leaves. I planted them in a pink/red/pink/red pattern and tried to talk about that too. But at this point in time, mud had his full attention (and that’s OK!).

At the end of it all, the flowers were planted and one dirty boy got his second bath of the day. Oh yeah, and we tested out the “super secret Mother’s Day project” and it works fabulously. 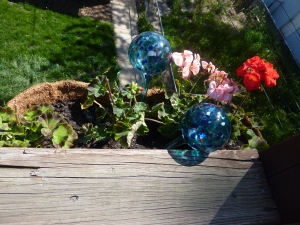 With Aqua Globes and all

All clean again. I asked him to smile, this is the look he gave me. At least he's looking at the camera!

What did Zach learn today? What happens when dirt gets mixed with water. Some color and pattern lessons.

What did Mommy learn today? If you give a boy dirt, he WILL make mud. And that I could probably have squeezed one more plant into each flower box, but I didn’t have the flowers and wasn’t going to wait to get more!

It’s springtime! And the weather is (mostly) nice these days. Earth Day is coming up, so it’s a great time to plant something green. Or yellowy-orange, as the case may be. All morning while we ate breakfast, took a bath, played with toys, etc. I tried to talk about seeds. How we put dirt in a container, put a seed in the dirt and with lots of love, water and sunshine that seed would grow into a flower. I told him that after we ate our lunch, we could plant some seeds to grow his very own flower.

The “official” tutorial can be found on this website. This was actually something I knew how to do, but thought I’d include some instructions.

First things first, eat a healthy lunch. You’ve got some hard work to do. 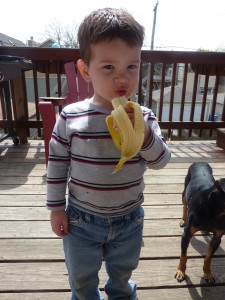 Supplies for the project

Some potting soil (Zach didn’t need a 40 lb. bag for this project, mommy has her own potting projects to take care of over the weekend), an empty carton of some kind, paper, crayons, scissors, a glue stick, and seeds of your choice. I also figured we’d want some tools for handling the soil. A shovel made sense. Though as you’ll see, that part is up for discussion!

It is important to wash out the container of choice and let it dry completely. I’m not sure Marigolds enjoy heavy whipping cream.

Next, Zach colored the pieces of paper. He did this while alternating turns of trying to toss the crayons over the side of the deck, eating them (yes, he still does this) and taking bites of Mommy’s apple that he stole. Some scribbles did manage to get put on paper.

Coloring with one hand. Eating mommy's apple that he stole with the other. What a multi-tasker.

Mommy helped him trace the letters of his name

While he was busy coloring, I got the container cut to size. About 4 or 5 inches high will do. 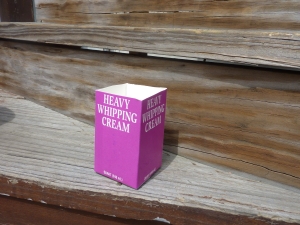 Mommy did the cutting, Zach is a bit too small to handle sharp scissors

Now, the fun part. This is where I have been declared (at least for today) the BEST MOM EVER! The playing in the dirt part. Dump trucks optional (but oh so fun). Somehow, no matter what the method is, as long as the dirt gets into the container, that’s all that matters.  Zach decided a dump truck, a front loader and a shovel were necessary for this task.

First, you scoop the dirt from your dump truck 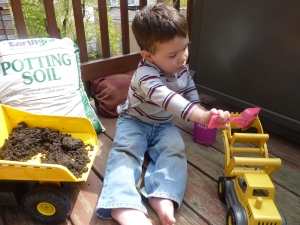 Then you put it in the front loader

Finally, the front loader dumps the dirt into your container

Now, the hard part. I had to convince him not to dump the dirt back out so we could plant the seeds. To accomplish that I had to promise he could play with more dirt later. Then we poked a hole in the soil, planted the seed and covered it again.

Poke a hole in the dirt & insert seed 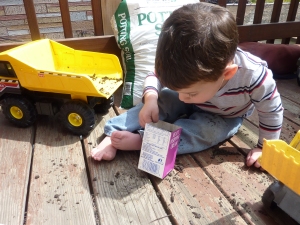 Then I cut the pictures he colored to fit the sides of the container and glued them on. Zach, as I promised him, was given more dirt to play with. I also poked some holes in the bottom of the container to help drain excess water. I did make Zach come help me water his seed though.

All that hard work deserved an award, of course. So Zach got to each a cupcake from yesterday! Yum! 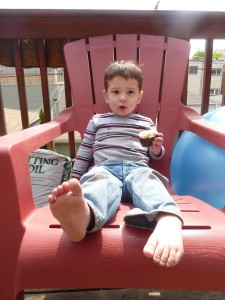 What did Zach learn today? He learned some biology–that seeds make flowers grow (with the help of dirt, water, sunshine and love). He learned some shapes, colors and letters of his name as we drew the art for the sides of the planter (well, at least we talked about these things, he’ll have it learned eventually!).

What did Mommy learn? That no matter what, dirt in dump trucks is way more fun than anything I have to say. And that’s OK. And also, you need more than a few baby wipes to clean potting soil off your hands :).

What did the twins do during this time (I know you are all wondering)? Sleep, of course! Nap time while soaking up some Vitamin D! 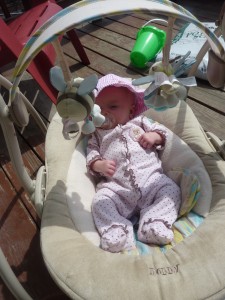